More than two and a half years ago, I started this blog as a way to work through my issues and hold myself accountable for all the promises I was making to God as I tried to pull my life back together.

Promise after promise is what I would make, and ultimately fail to keep, over and over. I thought the blog would help me with that, make me accountable and help me stop the seemingly unending cycle of "Promise, fail, confess, repent, promise, fail, and so on..."

Look at those phrases that I underlined. I was working so hard... and still failing... because I didn't understand how to let Him handle it. I kept trying to do it in my own strength.

Not only that, but I was doing it all to please Him, to appease Him, because I knew it was "the right thing." He had been blessing me, and while those blessings were completely unearned, I continued to try to earn them... or at least do what I could to make sure He didn't take them back! My lack of understanding was holding me back more than anything else.

As I spend more time with Him, immersing myself in the Gospel of Grace, I can't help but see how much I was missing the mark in my promises, because I was focusing on my part of the struggle. Thankfully, over the last several months, that has changed for me. I am learning that He IS the good, gracious, loving God I had always wanted to serve. I am learning how to rest in Him. I am learning to let go.

I don't always get it right. I can't promise you won't pull this up and see a particularly human blog post about "poor me" any time soon, but you can be sure that if you do, it's not because my trust in Jesus or God's grace has wavered at all... only my focus.

I'm very happy to say that, looking back over the last couple of years, there is a difference in this blog...especially the last several months. I'm excited to keep writing and see how it changes more as my relationship with Him continues to grow.

Promise after promise from one of the most fallible people I know (me)... that was often hard to write about. Whether it was all completely necessary or not, God has used it all for good, and I am grateful!

Promise after promise from a God of grace... that is something I look forward to writing more about.

If God’s promise is only for those who obey the law,
then faith is not necessary and the promise is pointless.
~Romans 4:14

He made heaven and earth, the sea, and everything in them.
He keeps every promise forever.
~Psalms 146:6

God also bound himself with an oath, so that those who received the promise
could be perfectly sure that he would never change his mind.
~Hebrews 6:17

And now that you belong to Christ, you are the true children of Abraham.
You are his heirs, and God’s promise to Abraham belongs to you.
~Galatians 3:29

Posted by Kindall Nelson at 6:11 PM No comments:

Not about the chains

Around midnight Paul and Silas were praying and singing hymns to God, and the other prisoners were listening. Suddenly, there was a massive earthquake, and the prison was shaken to its foundations. All the doors immediately flew open, and the chains of every prisoner fell off!
Acts 16:25-26

It was dark in the jail cell. So dark, in fact, that the guard had to call for a light to check on the prisoners. The darkness couldn't hide the filth of the jail. The smell was rank. Being underground made it easy for waste and rodents to accumulate. Even the guards didn't want to be there. Only the poorest, lowest-ranking guards were assigned to this place. 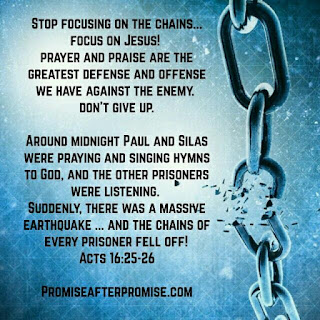 One can barely imagine, these days, what a place like that really must be like, much less how anyone who ended up there through no fault of their own could stand it for even a short time. Paul and Silas were there after being unjustly beaten and chained into the stocks. In fact, the punishment was so undeserved that the Roman government tried to let them go quietly the next day. They refused to leave that way and were actually apologized to by the officials, who then asked them again to leave the city.

What happened the night they were in jail, specifically in those two verses, says a lot about the way we should handle our own negative situations, the chains that are binding us.

First, note that Paul and Silas were UNJUSTLY imprisoned. Yet, did they continuously call for the guards or the government officials? Did they complain about their imprisonment while locked in the stocks? Did they tell their story over and over, hoping for some cell-mates or the guard to be on their side? There is no note or mention of Paul and Silas complaining about anything. What does it say they DID do?

"Paul and Silas were praying and singing hymns to God..."

They didn't focus on what was holding them down. They already had faith that He would work things out for the good of those who loved Him. So, what was left to do? Rest in His presence with prayer and praise, beginning early and continuing until the earth quaked at midnight.

How long were Silas and Paul singing before the chains fell off?

What are the chances that this pair had just started their singing when the earth began to quake? If you've spent the day in a dark, filthy prison, does midnight seem like the time of day you'd feel like striking up a song?

When surrounded by negativity, it is easy to feel despair yourself. As night fell and hopelessness set in for many of the prisoners, Paul and Silas knew that to keep hopelessness from setting in for themselves as well, they had to fight the best way they knew how: Prayer and praise.

What would have happened if there had been no change to the situation? If their imprisonment had gone on for days or weeks, would they have stopped praying and singing? While they spent this one night in prison, Paul actually spent a total of about 6 years of his ministry in prison. He wrote between eight and thirteen books of the New Testament, depending on who you ask, many of them from prison. I don't doubt they would have continued to sing, even if their miracle hadn't come that night.

Who is watching you?

"the chains of every prisoner fell off"

When you focus on Jesus instead of your struggles, instead of the injustices dealt to you, instead of your chains... it not only impacts you. It impacts those who see it. Your praise could be the thing that breaks the chains of those around you.

How in the world could anyone go through what Paul and Silas went through... or what you are going through right now... and continue to pray and praise the Lord?

Paul knew who he was in Christ, trusting Him fully. Paul also knew what understanding that would do for you as well.

Then Christ will make his home in your hearts as you trust in him.
Your roots will grow down into God’s love and keep you strong.
~Ephesians 3:17

That trust grows as you turn your focus towards Jesus. Stop focusing on the chains and focus on Jesus. The more you know Him, the easier that becomes. You have to know that He wants only good for you.

He sees you sitting in the dark, feeling chained to the floor. He knows what you need and want. He knows how you feel. Know this... He will break the chains. And when He does it, you will feel them break, but you won't see it happen... because your eyes will be on Jesus.
Posted by Kindall Nelson at 8:06 PM No comments:

I want to tell you

I have a half-dozen, half-finished posts in my drafts folder.
I have so many thoughts and revelations I want to share
about what God has done and what He wants for my life, and yours.

I could wait a few more days, keep trying to write those things,
hoping that eventually I would "feel it" when I hit "Publish."
Or I could put together a post from my head, instead of my heart,
and hope that He uses it to inspire you anyway.

But instead I have to admit that I don't have the energy.
Life is overwhelming me today. Nothing is going as I planned.
Nothing is happening in my time. Fear is trying to take over.

Yet still I want to tell you all of those things...
because regardless of how I'm feeling today,
regardless of the battles I am fighting this moment,
I KNOW these things are true.

These are not just cliches to be tossed back and forth between hurting people.

These are Truth, the Truth that sets us free.


I can do all things through Christ who strengthens me.
Philippians 4:13

I tell you the truth, anyone who believes in me will do the same works I have done,
and even greater works, because I am going to be with the Father.
John 14:12


But he was pierced for our transgressions, he was crushed for our iniquities;
the punishment that brought us peace was on him, and by his wounds we are healed.
Isaiah 53:5
Posted by Kindall Nelson at 12:25 PM No comments: