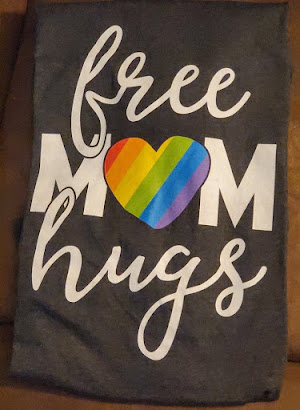 My new shirt came in the mail yesterday.
When I originally decided to get one, my plan was to attend a Pride parade and hug some broken-hearted people. The pandemic has put a bit of a damper on that temporarily. We'll see what happens when parades are the norm again.
I can honestly say that I had never thought much about the children, teens, and adults who came out to their families only to be rejected, kicked out, beat up, disowned, and made to feel worthless because of it... until two of my own children made similar announcements within the last year.

They have both made their statuses public and made it clear it's not a secret.
It wasn't easy to hear either time. I love them both and I love them unconditionally. But like many parents, I had a vision for each of my children's lives... and this wasn't part of my plan.
One child spent weeks being angry with me for perceived homophobia before she realized I wasn't "pretending I didn't get her hints," I was, in fact, clueless that she was dropping hints. While she accepted that, I still felt like things were a little strained until we had this conversation via messenger one day in April...

Her: I have a girlfriend.

Her: Why? What did (sister) tell you?

Me: Nothing. I just knew you weren't social distancing, so of course you caught the gay.

One of our love languages in my family is a mixture of sarcasm and silly jokes. I felt like that was the moment she understood that I understood.

In case you are concerned, this love language works both ways. One of my daughters told me on Mother's Day this year, "You're a good mom, even if you did raise two gays."
The younger of the two actually came out to me first. She decided she couldn't keep it in any longer, and told me a few days after Mike and I were married that she was interested in girls as well as boys.
Not only was I still recovering from the trip, trying to fight through jetlag and new family stress, but I was terrified how my new husband was going to handle it and how it would affect our days-old marriage. Mike and I were both exhausted and grouchy. We pretty much fought our entire first week back from the trip. So while I knew I would stand by her regardless, Mike and I had never talked about this possibility or what he would do.
I sobbed. I was mad at her for announcing it right then. I told her she wasn't old enough to make this kind of decision. I probably said a couple of other things I'd not say a second time around. Then I finally told her I loved her but I couldn't handle this right now, and I went to bed.

I assumed that would shut down the conversation about it for the night. I was wrong.
While I couldn't wrap my brain around what she was telling me and what I was supposed to do, my new husband pulled out scriptures and talked to her about what God wants for her life and how, while we don't believe the Bible says this is it, it also doesn't mean God doesn't love her or will turn His back on her.
He made sure she knew that her choice to be true to herself wouldn't be without consequences, but Hell was not one of them, and neither was losing the love of her family. He also told her whoever she was dating at any time was always welcome at our home.
I love that man so much.
Over the next few days we talked more and I was able to give her more of the support she needed. I'm thankful she gave me a second chance to get it right.
It breaks my heart to know that there are so many in the LBGTQ community who were rejected by their families. It hurts to imagine not being able to get a mom hug, even though she lives not too far away. It's not just unfair. It's cruel.
A couple weeks ago I held one of my daughters as she cried through a break-up. The gender of the person who broke her heart didn't matter, even a little bit. She needed a mom hug, and I was there. 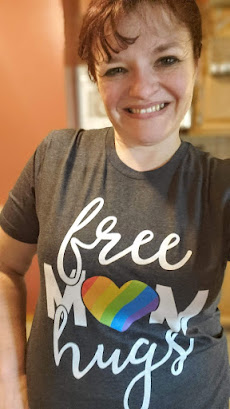