When I don't understand

There is a song we sing at church that I love:

If you ask the average Christian,
they would probably agree with that statement:


"Of course! We should always turn to God, even when
we are in circumstances we don't understand."


I would have said it myself, back when we were homeless. Or, even before that, when I was making one bad choice after another. But did I really choose Him every time? What does that look like for someone to choose Him in the face of something they don't understand?

Countless times I have fallen into my bed crying. Feeling defeated by Satan, upset at something not going the way I expected, asking God what I did wrong to make it happen the way it did, or why He didn't want the same thing I wanted. Often, I just sulked. The disappointment would zap the energy from my body, sometimes rendering me useless for the night.

That doesn't really sound like trust though, does it? That doesn't sound like choosing Him. It sounds like getting stuck with no other options so, "I guess I'll see what God is going to do."

As I've gotten to know the real God more, as opposed to the one I thought I knew, I've noticed this happens less and less. Even in disappointment, I can say, "I don't understand, but I choose to trust You."

I know that I love and serve a God who heals. This week when the healing that I was believing for didn't come when I expected it, I took it pretty hard. I came home and made a beeline for my bed. I could feel the energy draining from my as I messaged a friend who prayed for me at that moment.

A little bit at a time I started to feel a little peace. It was just enough to pull myself out of bed and run payroll for my business. Then I went to the bank, and grabbed dinner on the way home. Before long I was messaging the friend to tell him I was feeling better. 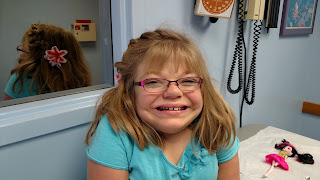 My youngest has to have her tonsils out. It's not usually a big deal for most children, but it can be for children with Hurler's Syndrome, which is what she has. I had reason to believe she was going to be healed before our appointment. I believed we were going to go in and the doctor was going to say, "Amazing! They are normal sized again! No surgery needed!"

It didn't happen that way, and I don't know why. Her surgery is scheduled for the end of October and includes time in the hospital before and after for testing and monitoring, and, according to the doctors, up to two weeks out of school.

Do I understand why surgery is still "on" as of now? No.
But I absolutely believe Lauren's healing can come before then.
Even if it doesn't, I will still choose to trust Him.
What does fully trusting Him look like?
I'm still not sure that I know completely. But I'm working on it.

Surely he has borne our griefs
and carried our sorrows;
yet we esteemed him stricken,
smitten by God, and afflicted.
But he was pierced for our transgressions;
he was crushed for our iniquities;
upon him was the chastisement that brought us peace,
and with his wounds we are healed.
~Isaiah 53:4-5

I tell you the truth, anyone who believes in me will do the same works I have done,
and even greater works, because I am going to be with the Father.
-John 14:12

More on God's gift of healing can be found here: http://www.awmi.net/reading/teaching-articles/healing_knowledge/
Posted by Kindall Nelson at 6:43 PM No comments:

The God I wanted to serve

It's no secret that striving to be a good Christian hasn't always been easy for me. As I've struggled over the years to be the person God wants me to be, I felt like a constant disappointment.

I believed that if He really knows everything from the tiniest of my thoughts to my stupid mistakes and right on up to my outright blasphemy at times, He's never truly going to be happy with me. Sure, I believed God forgave when I asked. I never doubted my eternal salvation. I knew I was getting in, but if the Pearly Gates were a heavy stone door, I was rolling under it, Indiana Jones style. Barely making the cut-off.

And then I encountered the Gospel of Grace. As I delve into teachings that I've never encountered before, and feel the Spirit move, I am blown away by both the simplicity and the complexity of the Word. Beliefs I've gathered from various friends, pastors, and churches over the years are falling off of my weighted-down shoulders and hitting the ground in a million pieces.

This (negative thing) was God's plan. *crashed*
Everything happens for a reason.  *shattered*
The Lord gives and the Lord takes away. *smashed*
When you sin, God is angry with you. *demolished*
God will punish you for your sins. *destroyed*
There are still miracles, today, but not for me. *busted*
God uses pain and sickness to keep us humble. *obliterated*
God created this horrible circumstance to build your character. *disintegrated*

Read those. Do those sound like characteristics of a loving God? Yet, a lot of those are things you will hear in churches on a typical Sunday morning. After hearing them for 35 years, you'd think it wouldn't have been so easy for me to let go of those beliefs, especially if you believe some of them yourself.

Surprisingly, while there were some concepts that took time to wrap my brain around, it wasn't difficult for me to let go of these at all. Why?

A friend of mine put it perfectly. This is the God I've always wanted to serve. The one I WISHED existed... the One who wanted me to love Him without fear.

I wanted to love a God who didn't seem wishy-washy and didn't play favorites. I wanted a God who wanted my family and me well.

I wanted a God who didn't leave me looking at the Bible saying, "I'm never gonna live up to this." I wanted to love a God who instilled confidence in me as I am, as opposed to the nervous tight-rope walking I was doing before.

It turns out the God I wanted IS the God I love and serve... I just didn't know Him as well as I thought I did. So many things I attributed to God, and accepted because I believed they were from Him, were things I should have been fighting... because it isn't God who takes away, causes pain, makes people sick.

I could write on this forever, but I'll leave you with these verses. If you question some of the things I say God isn't... read these and the list of myths above and see which ones align with God's word.


Every good and perfect gift is from above, coming down from the
Father of the heavenly lights, who does not change like shifting shadows.
~James 1:17

God doesn’t take back the gifts he has given or forget about the people he has chosen.
~Romans 11:29

“Just as I swore in the time of Noah
that I would never again let a flood cover the earth,
so now I swear that I will never again be angry and punish you.
For the mountains may move and the hills disappear,
but even then my faithful love for you will remain.
My covenant of blessing will never be broken,”
says the Lord, who has mercy on you."
~Isaiah 54:9-10

What negative things about God are you believing today that are keeping you from experiencing the joy that grace brings?
Posted by KB Nelson at 8:28 AM No comments:

I've prayed big prayers.
I've asked God to cover huge bills, provide housing,
fight for me when I thought nobody ever would... and He has. Every single time.

But what about the little things? What about the everyday provision? Oh sure, prayers go up when I'm running late for an appointment and can't find my keys, but really, God has enough going on. He doesn't really want to hear me ask for help with little things we deal with every day, right?

Blessed with some fresh green beans this week that I hoped to make into a recipe that my kids love, I realized the recipe would be good for a cook-out coming up this weekend. If I was going to do that though, I'd need some more fresh green beans... No big deal, I thought. Maybe I could find a road-side stand or get some at the farmers market this Saturday...

This morning a client let me into her home, gave her instructions for the day, and then said to me, "Could you use some fresh green beans? I have a whole bag and nobody will eat them here."

Green beans? Really? I mean, she could have had too many tomatoes, green peppers, cucumbers... but no, just green beans... and a couple of my favorite sweet peppers. She went on to explain that she usually splits her produce with a couple friends, both who were out of town this week.

My first thought was, "Thank You Jesus! I didn't even ask for help here, and You still provided!"

I love that I have a God who doesn't miss a chance to remind me He loves us and cares about my everyday. He isn't just God to those who are in desperate need. He is for us every single day and no detail is too small to escape His notice.