You won't see many blog posts out there on exhaustion from a first person perspective. Why? Because exhaustion sucks the creativity right out of the person who is dealing with it. It sucks the energy out of us too.

I haven't written because that's where I was. I'm out of it now and can write again. So, what happened? Was I doing more? Was I not taking care of myself? Was I just lazy?

My business was good, but stagnant. The volunteer work I once loved had turned from creating light shows and scenes that set the tone of a church service to scheduling people and being in charge of processes. Lots of stuff like that. Boring.

I hired a business coach to try to figure out why I was burnt out and to get help. Actually, it was our first meeting, before I even hired her, that she showed me that I was designed to create... not manage. I suddenly felt free to explore other ideas for the first time ever... because I was doing what God designed me to do.

I had been going to live music shows and posting about them so other people could find them too... but I had been viewing it as a hobby I probably shouldn't take seriously. When I realized that I had confined myself to the boredom and burnout I had been dealing with, I decided to pursue something new... something that breathed new life into me. 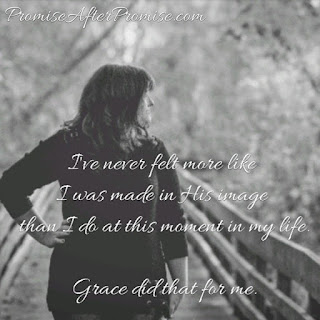 Suddenly, it was a business. In 6 weeks I had over 500 followers (growing every day) and local bands and venues are working with me to get their shows promoted. Three months ago I was still too scared to walk into a music venue or a bar by myself. In fact, it was just about 3 months ago that some friends were late for karaoke and I sat in the car for 20 minutes until I was sure they were inside before even getting out of my car.

Two weekends ago I saw seven bands in seven venues in two nights, but kept to myself... not letting anyone know who I am. This weekend I saw 6 different bands and walked up and introduced myself between sets. People who know me, look at me and are amazed at the differences they see.

I've never lived outside of my comfort zone so consistently or so deliberately before.

Some may see that and think, but what does that have to do with grace? Isn't this a blog about how God's grace changed your life?

And because I'm no longer living in fear of making the wrong choice or making God angry... I know who I am, who He created me to be. The world can put all the expectations on me they want. It doesn't bother me. I can focus on the thing He created me to do. CREATE.

I've never felt more like I was made in His image than at this moment in my life.

Grace did that for me.

God created mankind in his own image.
Gen 1:27

By grace you have been saved through faith.
Ephesian 2:8

I will put my laws into their minds, and write them on their hearts,
and I will be their God, and they shall be my people.
Hebrews 8:10b
Posted by Kindall Nelson at 11:38 AM No comments: