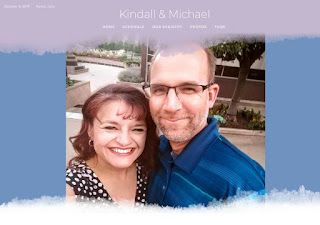 Depending on how long you've been reading this blog, and whether or not you follow me on social
media, you may or may not know that I'm about to get married after 16 years of being single.

God has blessed Mike and I in so many ways and we look forward to spending the rest of our lives growing closer to each other and God.

I have so much more to say about that, but I just wanted to let people know first.

I'll write more later... because there is so much more. God is so good... and always does things bigger and better than I can imagine they will be... Yes, I'm getting married to an amazing man. And, it's going to happen in Rome, Italy... on October 9, 2019.

I don't know how long our wedding website will exist. So here is the link, but it may not be there if you are looking back a couple of years from now. So I'm sharing the information below as well.

My favorite part of this site is that I get to tell everyone some of the story us...

TLDR: We Both Swiped Right (But really, read the rest!)

Mike loves to see me squirm when people ask how we met...
so I'll just put it out there up front. lol.

We talked for a week or so before he asked if I wanted to meet up. We met at Chick-Fil-A and chatted for about 45 minutes and then went our separate ways.

Our first official date was 6 days later - at Kenny's Westside Pub to see the Central Illinois Jazz Train, followed by Open Mic night at Office on Main in Morton (to watch, not participate.) As we were driving that night, I told him a story that involved having faith for healing and seeing it happen right away. As I was saying it I thought, "Oh man, he's probably going to drop me off at home and tell people about the crazy girl he took out." Instead, he responded with a similar story of his own. That was a pretty big sign for me.

The dates after that all sort of run together because if one of us wasn't out of town, we were together. There was a lot of live music and a lot of laughter every time.

Mike doesn't really consider the first one a proposal, but I do. It was spontaneous and heartfelt. We were sitting in his car in the parking lot of his apartment building a couple of days before Christmas, and he turned to me and said, "So, how does a guy find out what kind of ring a woman wants without ruining the surprise?"

I told him I'd send him an email with a link and he could open it next week or he could open it in six months... completely up to him. On Christmas Eve he downloaded the Zillow app and started looking for houses.

That's when I knew he was serious.

Fast forward to this summer... He saved up the money for a ring, but used it on the down payment for a house. Then he saved up the money for a ring again and this time used it to pay for his ticket to join us on Lauren's trip in October. He told me hadn't done a formal proposal yet because he didn't have the ring yet. I told him the ring didn't matter and the how didn't matter... it was the why that was important.

Then, for my birthday, he went out and got a "for now" ring, wrote Marry Me on my birthday cake in Icing, and stuck the ring in the frosting flower.

I'm so used to being the one taking video at birthday parties that it didn't even click what was happening until someone said something about the cake. Once I saw it, he got down on one knee and proposed in his kitchen, with our kids and a few friends there.

Before we even knew each other...

But think about the chances of that... He worked with my dad NEARLY TWO HOURS AWAY from where we live... FIFTEEN YEARS before we met.

For those of you who don't know, Mike is an insurance adjuster for a large insurance company. They employ 900+ people in the area. A few months in we realized that he had handled a claim of mine, four months before we met. He had no idea in February of 2018 that he was talking to his future wife, who he wouldn't meet until June... and I certainly didn't! But God knew. <3 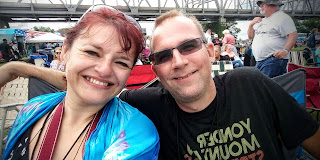 I love the way God knows how to touch us individually. He doesn't just do good things and hope that
we get that it was for us. He's like the parent who makes a special trip to the store to ensure the bows on a daughter's birthday gift are her favorite color. It's a parent's way of saying "I see you. I know you. I love you."

With God there's so often that little touch, that special something that is Him saying, "I see you. I know you. I love you." He wants me to know He is doing something for me, not just for somebody... but for me specifically. Not just a family, but MY family.

About 12 1/2 years ago, not long after Lauren was diagnosed with Hurler's Syndrome, I met an incredible network of people who are also parents of children with Hurler's and similar diseases. They became my best resource and source of hope on the days where I felt like the whole universe was against us.

Not long after I found them, someone shared a beautiful poem/essay written by Emily Perl Kingsley called, "Welcome to Holland."

Emily drew a beautiful metaphor: If having a baby was like planning a trip to Italy, where I read the guidebooks and learned some of the language and packed everything that I needed for the journey to Italy, then finding out I have a child with special needs is like the plane landing at the airport and having the flight attendants say, "Welcome to Holland."

And it's easy, and even natural, to be angry. Stomp your foot. Say, "I didn't want to go to Holland. I
wanted to go to Italy. I'm ready for Italy. I never planned for Holland...!" She talks about it being normal to grieve for Italy, but then points out that if the only thing I focused on is the fact that I wasn't in Italy, I will miss out on all the beautiful things to see, right there in Holland... windmills and tulips and Rembrandts... just to name a few.

Emily had explained it so perfectly for me. Your perspective is what matters. Look around. Appreciate what you have. It applied to so many situations, that I have shared it with many, many people throughout the last 12 years.

Early this year, when Lauren's Make A Wish wish-granters came to the house, I was surprised when she told them what her wish was. It wasn't anything that I had heard her say before. And I didn't immediately make any kind of connection. Only later, as I was sitting on my couch, contemplating things on my own, did I realize that the daughter who brought me to the proverbial Holland, was now literally taking me to Italy.

It's hard for me to share that without tearing up.

Now, don't get me wrong. I don't believe that God made Lauren choose Italy for me at all. But, as a
good friend once said, "God plays chess backwards." He knew that this is where we were going long before Lauren was even born. And, that Emily's essay would come to mean a lot to me over the years.

In the making of this miracle, God said, "I've seen you. I've known you. I love you."

And, just so you know, I don't think I'm special. And by that I mean He does this for everybody... you just have to look for it.


He sees you. He knows you. He loves you.
And He delights in showing you, if you're willing to see it.

My friend called it a game of chess, but I see a page full of dots... thousands of seemingly random dots. It might be years before some of the dots are connected, but when they finally are, the picture will take your breath away.

Are not two sparrows sold for a copper coin? And not one of them falls to the ground apart from your Father’s will. But the very hairs of your head are all numbered. Do not fear therefore; you are of more value than many sparrows.” Matthew 10:29-31