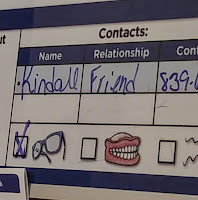 It was strange seeing the marker board at the hospital yesterday. My name, phone number, and under 'relationship', the word, FRIEND.

Now, I understand the practicality of it. I'm his daughter's mom.  If something happens, I need to know. But the fact that this person who expends more energy hating me than doing any other thing has a sign in his room with the word "friend" next to my name was a good kind of weird.

I prayed it was prophetic.

While I don't expect to ever be meeting him out for coffee and chatting about our day like I would with other friends, I can't help but want good things for him. 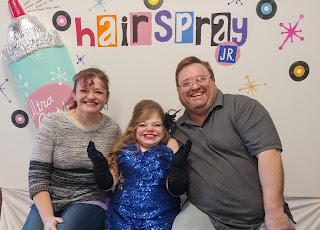 Lauren adores him. If there is no other reason in the world, that one is enough. The joy she had when we both attended her musical last month and sat at the same table at an after-party was obvious. We even got pictures of the three of us.

There are plenty of other reasons, too. I believe God creates everyone with something to offer the world. What we do with what we've been given is our own choice. But, if you don't understand the loving nature of God and the grace He's given you, making the right choice can be difficult.

I wrote once about collateral damage in dealing with other people. I said, "you can't yell at a drowning man for splashing water on you while trying to figure out how to save himself."

Sometimes though, that drowning man has convinced himself that if he throws enough water on you, the ocean will be shallow enough for him to stand.

I fought that water for years. It took a long time, but eventually I learned that as long as I'm in the boat, the water can't really hurt me. It's just water.

The grace that taught me that, also taught me forgiveness.
Forgiveness is a powerful thing.

I hope someday he'll see what a friend I really am and how much love, compassion, and confidence in God's grace it takes to stand at the bedside of someone who viciously blames you for everything that is wrong with their life in new and shocking ways on a regular basis, and offer to pray for them.
For his sake and Lauren's both, I hope it happens soon.
I would very much love to one day not think twice about being referred to as his friend.

12My command is this: Love each other as I have loved you. 13Greater love has no one than this: to lay down one's life for one's friends. 14You are my friends if you do what I command. 15I no longer call you servants, because a servant does not know his master's business. Instead, I have called you friends, for everything that I learned from my Father I have made known to you. John 15:12-15

I've been arguing against raising minimum wage in Illinois for weeks. I've tried again and again to explain that this measure would be no more helpful than printing money to pay off national debts. I tried to explain it from all angles... and while it seems like most people understand and agree, nothing slowed down our governor's rush to sign the bill.

When I got the notification today that the news station was going live to watch the bill being signed in that moment, my heart sunk. For a split second, I even felt a little sick.

Then I heard it... that still small voice inside myself.

"Why are you upset? Who is your provider? Do you think He didn't know this was going to happen? Do you think God is sitting there with His head in His hands trying to figure out what to do now that Pritzker ruined His plans to not only provide for you, but to prosper you?"

I keep trying to imagine that and laugh. In fact, if God had made me an artist instead of a writer, that's the picture I'd be drawing for people right now... A Mosaic-Charlton Heston-looking-God, sitting on a big white and gray marble throne with his elbows on his knees and his face in his hands. And a caption that reads, "Dang it Pritzger… NOW what am I going to do!?!"

It is silly, isn't it... the way we get so caught up in ourselves, forgetting what God has promised us? Forgetting who He is and who He says we are?

There are a lot of things I don't know.

I do know that I will be okay, despite the fears that often overtake me. I do know God has promised to take care of me, regardless of what's going on in the world. I do know that sometimes even I'm surprised by how He does it, and that it often turns into an encouraging story of faith that I can share with others.

So, I'm going to thank God for all He has done and all He will do... and stop complaining about how this will impact small businesses, including mine.

The time to fight to keep it from happening has passed. Now I'll shine on in spite of it.


Light shines in the darkness, and the
darkness has not (and can not) overcome it.
John 1:5

For I know the plans I have for you
declares the LORD, "plans to prosper you
and not to harm you, plans to give you hope and a future.
Jeremiah 29:11

I've been making excuses
for why I haven't written
When I know that really
there are none that matter...

I have another post to write,
but I didn't want to skip
over what happened in Minnesota.

The long and short of it is that God answered my prayer.

While it took me telling Him
that I would understand Who He is
"Even If"
to pull myself out from under
the paralyzing fear and depression,
It was the prayer I spoke
in desperation that was answered.

Please, God, just let this be a mistake.

That's what it was.

The confused specialists in Minnesota
couldn't understand why
I was making such a fuss.
They had received the images,
but not the report from the home doctor.

When I pulled out my copy to read aloud
everything fell into place.

"Excuse me, can I see that? I'm going to talk to another doctor for a minute."

And a few minutes later...
the most beautiful words I've ever heard...

"We have compared the previous images with this year and we don't see any differences. We will have our radiologist follow up to be sure, and give you a call... but we believe the original radiologist who made the report measured incorrectly."

I've never been so happy to have spent $1000 on an unnecessary, stressful trip out of state.

The most amazing thing
was realizing that
the answer I got
was one I begged for
in a hopeless moment
of waning faith.

He heard me anyway.