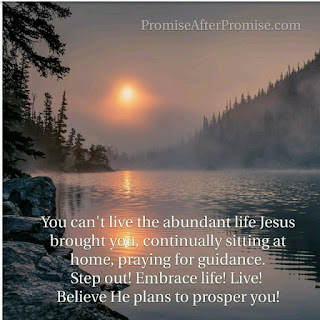 I'm not sure which moment in time it was that I decided I wanted to live, but I know I'll never go back to where I was before.

Don't get me wrong... I never wanted to die. The opposite of living isn't always dying... often it's merely existing.

I existed for a long time before I decided to live. It was the revelation of how good God actually is and what He really thinks of me and wants for me that made me unable to imagine living a life of "just getting by" any longer.

Now when I read God's promises of blessings and prosperity and an abundant life, I don't even have to think twice about how I should live. I know that's the life I want. It seems silly to know you can have more in life and to say "No thanks." Yet people do it every day.

Some people will read the words "prosperity" and "abundance" and get a little irritated, but it isn't about money. I know better. I don't care about money at all really as long as our needs are met... and He has promised to do that, so I'm not concerned there either.

I could probably write a whole blog post just about how and why I keep doing new things if it's not about the money, but I heard something today that explained it perfectly.

Honestly, I was taken aback by many of the things Erwin McManus said as I listened to The Last Arrow on audiobook. It wasn't because I disagreed at all. It was because he was putting into words the things I've been feeling and thinking over these last couple of years since I learned who I really am.

At one point he told the story of giving money to a woman in a refugee camp. He was making a slightly different point than this, but it was this sentence within his point that got me: Sometimes you pray and sometimes you are the answer to someone else's prayer. A little jolt ran through me there.

I want to be the answer to other people's prayers.

That's what I want. That's all I want.

If that means constantly stepping out in faith, doing things that don't make sense, or creating things for other people's benefit, so be it.

If you had asked me a few years ago about living like this, I would have faltered. I was scared of everything. Everything I did was to merely survive, to get by without messing up. I knew I was undeserving, incapable, and too broken to be of any use to anyone. Fear had ahold of me.

But I know now that fear is a liar.

I LOVE THIS QUOTE ABOUT FEAR:


Fear is like a leprosy that eats away at our souls. It will lead us to build fortresses that look like security and safety.

Fear convinces us that we have locked out the dangers that would befall us, all the while blinding us to the fact that it hasn't locked the world out at all.

Instead fear has trapped us inside itself. It was never a fortress. It was a prison.

It not only changes the condition of your life. It changes you.


I know who I am and I know God's goodness... and it has changed me so much.

Several times in the book McManus says we should live like our lives depend on it... and while I like that, I have to say that what I really want to do is live like someone else's life depends on it... because I believe it does. I don't know who and I don't know where. I may never know. I just know that as long as God keeps saying GO, I'll keep going... because I never know which decision I make that will be that answer.

I am preparing for a trip to Los Angeles right now.

I'll be there for two weeks, setting up a new business, serving the community, and spending some time with my family. Fear disguised as logic tells me I'm crazy to try or to take this kind of a risk right now. But ignoring a loud and clear GO, ignoring this opportunity to be an answer to someone's prayer, is not worth the imagined safety of staying at home.

I can't wait to see what He does there...

I have set before you life and death, blessings and curses.
Now choose life, so that you and your children may live. ~Deuteronomy 30:19