Are your arms crossed?

Would you be surprised to know that I'm stubborn? It's true. I can admit it.

One of the perks of serving at church is that I usually get there before the parking team. Meaning, nobody gets to tell me I can't park wherever I want. Sometimes I drive 'in' the way marked 'out' to avoid being directed to a certain spot.

Ask my daughter who watched us all eat ice cream last week during family movie night because she refused to eat anything green with her meal how stubborn I am. She actually spit the salad in the trash and said, "Not worth it." I guess she's a little stubborn too.

I could go on and on with examples of my stubbornness. In some ways it helps me and has kept me from walking away from my business and the plans God has for me. In others, it has made my life so much more difficult.

It was August 2012 when I went into my part-time job and excitedly declared, "I found an apartment, finally!" I was so happy, I was telling everyone who would listen. In the break room, at lunch, I sat with my food and told another person about the apartment. Someone from across the table said, "Oh, are you moving away?"

"No." I responded, "My kids and I have been living at the camp grounds for six months. We finally have a place to live again."

Several people turned and looked at me as I said it. One of them asked, "You've been homeless this whole summer? Why didn't you tell anyone?"

Honestly, I didn't know. Probably for the same reason I didn't go back home and try to live with my mom or ask any of my family for help getting into an apartment.

While part of me was angry at the people who had "helped" get me there and desperately wanted to be rescued, another part of me undoubtedly believed I deserved to be there and had to pull myself out again to prove that I was not useless or worthless. If I had help, then it wouldn't have been ME who did it.

I recently read the story of the attack on Israel in the wilderness by the Amalek. (Exodus 17:8-13) When the Israelite army went to fight them, Moses stood on top of the hill and lifted his arms towards Heaven. Any time his arms started to fall, the Amalek would prevail. When he kept his arms up, the Israelites would start winning again.

Eventually, Moses' arms became tired. So, in order to keep his arms up, Moses's brother Aaron and their friend Hur, each took a side and held his arms up in the air for him until Israel won over Amalek.

It would take a lot of humility for a grown man to let his friends hold his own arms up for him. What if Moses had fought off his friends and said, "I can handle this! If God wants me to do this, then He will equip me. I don't need your help." I don't know that the outcome would have been the same. At the very least, the battle would have lasted much longer and had many more negative consequences when Israel finally won. 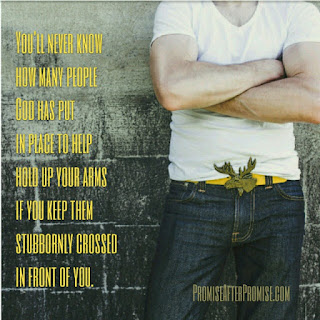 Looking back at our time of being homeless, I wonder how many friends God had in place to hold up my arms during that battle who never got the chance. I wonder how many people would have jumped in to help, if they knew what was going on. I later found out most of my extended friends and family didn't know what had happened until long after we had moved to an apartment. Neither did most of my church family.

While I'm thankful for the help I did receive along the way, and the miracles God did for me. I see now that I likely prolonged our battle with my own stubborn pride.

Nobody could hold my arms for me because I had them crossed stubbornly across my chest. My "I will do this my way" attitude likely extended our battle and left us all with more scars than we otherwise would have sustained... and just like with Moses in the battle with the Amalek, in the end, it wasn't ME who did it at all... it was God.

God has put people around you to hold you up during this battle you are in too. Look around and see how many people love you and want to help.

Ask them. Tell them your arms are tired. Then, LISTEN to what they tell you. The Holy Spirit often speaks through others when the roar of your pride drowns out His voice inside of you.

Humble yourself before the Lord and he will exalt you.
James 4:10 ESV

Where there is strife, there is pride,
but wisdom is found in those who take advice.
Proverbs 13:10 NIV

Where there is no guidance, a people falls,
but in an abundance of counselors there is safety.
Proverbs 11:14 ESV
Posted by Kindall Nelson at 12:39 PM No comments: