I really wish I had been better at writing this down every month and updating everyone. After the post where I talked about Mike and I arguing about the debt, we were able to work things out and I feel like he's really been on board with the fact that this is going to take him, me, and God to get this debt taken care of.
While we had made some good progress the first few months, I honestly thought that I was going to have to throw the whole "getting out of debt" plan out the window when the pandemic started affecting us.

Hire A Housewife went entire weeks without a single customer. I tried to innovate and offer new products as well as show clients that we cared, but people were concerned about safety, and they had every right to be.

Then the CARES Act put some things in place to help... and help they did. Between qualifying for SNAP benefits (meaning we haven't had to buy any groceries out of our pockets this 3 months) and a PPP Loan, temporary unemployment, and a few other things, we've made great strides towards paying down debt.  (This is especially true as a self-employed person with student loans... there is a provision in there that was super helpful for us.)

Yesterday I made my final credit card payment. 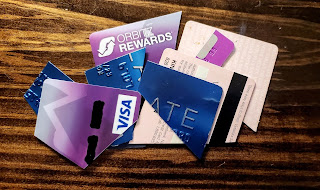 That's a photo of some of them all cut up. I mean, I couldn't do ALL of them. I will keep a few for emergencies or car rentals or business expenses that I will then pay off every single month.
I still owe student loans, my car, and the IRS, but we are making headway and it's pretty amazing to see all that has been paid down so far.

Credit card debt alone was over $23,000. Now, considering my NET income last year was less than that, this is a pretty big feat. It involved a lot of working smart in addition to working hard.
I was paying over $600 a month in interest last year before I decided this is what I needed to do. But by paying the cards off creatively and systematically, I was able to transfer large portions to 0% interest cards, which facilitated me paying them off that much faster.

One important aspect of all of this was saying I DECIDED to get out of debt. If I hadn't put that stake in the ground last year, it would have been very easy to say, "Woohoo! Free money!" and bought some fun things instead of paying down debt.

One thing that will change in the future is the total amount of IRS debt I owe. I finally got all the paperwork figured out and sent in, but they are running behind in opening mail at the IRS, so it might be a few months before I know what's going on with that. I'm not worried though. God's got this. And as astronomical as the number the IRS gives me is likely to be, we'll work it out.

Whatever goal you have in your life right now, stick with it.  The Bible DOES NOT SAY everything happens for a reason... but it does say God can work all things for your good
(even when the circumstances seem less than favorable.)

And we know that God causes everything to work together for the good of those who love God and are called according to His purpose for them.
Romans 8:28