A friend of mine posed an honest question on Facebook. For those who are stuck on "All Lives Matter," why are you still there?

I thought giving an honest answer might help others understand how to get the message across as well. Then, when I went back to paste my answer in, the question was gone. So I decided to turn it into a blog post.

I, of course, believe Black Lives Matter. Always have. I love people, all people.

However, I only started saying it that way very recently... within the last week or two. It was hard to switch from saying ALL to BLACK... Here's why.

First of all, I felt pressured into the change. I was told I was a racist for not saying it. And because I know I'm not, I wasn't going to be shamed into changing.
Many people who are passionate about this issue are also hateful to those who don't understand. So hateful, we fear asking questions because we know the answers we will get and labels that will be put on us. For many of us, our first response is to cling tighter to what we believe and ignore those who hurt us.
Second, change and growth often mean admitting you were wrong before. Admitting you might have been wrong is a hard thing for us humans, but so are change and growth... and we know those are desirable. Still, because of the other reasons mentioned here, there was no way I was saying they were right and I was wrong.

Which is the fourth reason... I really didn't understand. All lives matter feels like the most agenda-less of the two phrases. It felt like a phrase nobody could disagree with in a society where everyone fights about everything all the time. "All lives matter" feels safe.

But this last couple weeks everyone has been angry with each other, fighting over every word and action and definition. Quick to accuse and delete and I realized the first thing I needed to do was try to understand.
Asking questions was awful. I don't know why people are so mean to someone who WANTS to understand them. Instead, many would rather make me feel bad for not understanding them already. So I saved questions for when I really needed to hear other people's thoughts. The rest of the time I researched on my own.
When I first read the burning house analogy, it sort of made sense to me.

I was thinking about that one a little bit.
But then I saw this post on Facebook about Jesus leaving the 99 to go after the 1. 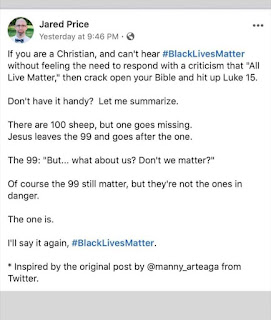 That's what made it clear. I was able to see it & understand then. And because nobody was yelling at me or looking down their nose being condescending to me, I also was able to realize it wasn't political tied to an agenda. It's about people who are hurting, asking us to acknowledge their value.

How many times in my life, have I sat at the feet of  Jesus, broken, and said, "Tell me You love me, Lord." Imagine if the message He sent back, however He sent it, came across as, "I love all my children."
While true, that answer would have crushed me... because I didn't need reassurance about all God's children in that moment. I needed to know that I was loved. Looking back, I've come to realize that God has NEVER ONE TIME let me leave one of those moments without knowing I was loved.
People stuck on the word "all" need realize this is not about politics or agendas or bowing to pressure. It's not about whether you have been right or wrong.
This is about a group of people crying out in pain saying, "Please tell me I matter to you."
When that happens, we have to put aside our own fear, politics, agendas, and feelings, and tell them, "Yes, you matter to me. Of course you matter to me. I hear your pain and I want you to know, your life matters to me."
And that's the one reason I say, Black Lives Matter.