I've said to many people that every time something amazing happened on our vacation, it felt like God tapping me on the shoulder, saying, "Hey, see that? That's for you!"

Our day at Disneyland was no exception. We entered the park and headed for an area of smaller rides that wasn't busy yet. We rode the Jellyfish and another ride before heading the Ferris Wheel. We were having a blast, and our day had barely begun! 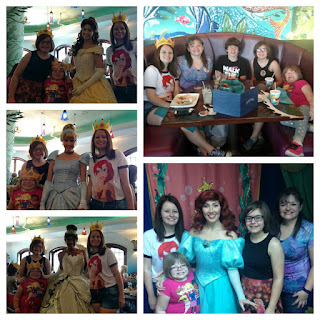 The food at our princess lunch in Ariel's Grotto was fantastic. We had wonderful service. The cast was wonderful. There were lots of pictures and hugs and smiles... and yes, a few tears from me. Every time a new princess came in, I teared up. The difference from where we were just four years ago... I just couldn't believe it was happening... meeting the princesses with my daughters.

When we got our photo taken with Ariel, she asked us what we were celebrating. "Family vacation." I told her. She replied, "Oh, spending time with family is my favorite!"

My quick thinking oldest child said to me (out of Ariel's earshot), "If spending time with family is her favorite, then why did she abandon them all for a prince?"

She loves Ariel... we all do! But I have to admit, it made me laugh out loud. 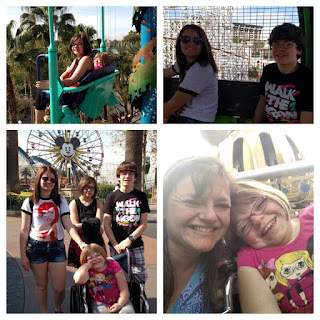 After lunch, we set off to find some more rides.

Every time the five of us stopped to look at the map in confusion, a cast member appeared and asked if we needed any help. Every time!

We managed to ride several rides that day. The squeals of delight from my children on the Indiana Jones ride actually teared me up. We rode Pirates of the Caribbean as well.

The big kids headed for a roller coaster while Lauren and I rode a smaller space shuttle ride and looked for a place to charge my phone.

Also, whoever came up with phone-charging lockers is a genius!


My brother, Peter, and our friend Todd (Executive Director of The Walt Disney Birthplace and our favorite Theme Park Expert) met us in the early evening for a couple rides before the parade.

The Carsland Radiator Springs Racers was definitely a family favorite. Who doesn't love Cars? We all could have spent a lot more time there if we had any left!

Then we hit Hyper-Space Mountain. Last time I rode, it was just Space Mountain. The addition of the Star Wars theme made me love it even more. I teared up a little on that ride as well, but I can't tell you if it was hearing how excited the kids were, or the Star Wars awesomeness. It was quite possibly a combination of both.

Ready to relax, we took dinner to the perfect "Light Up The Night" parade seats that Todd had reserved for us. 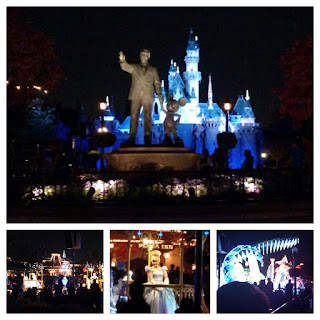 All of our favorite characters came down the street, lit up in an amazing display. The lights were bright and the choreography was performed perfectly. As each float proceeded past us, one kid or another would excitedly announce who was coming next. Everyone has favorite characters, but the parade was so great that our level of excitement stayed at it's peak the entire time.

When the parade was over, we turned our chairs around for a magnificent view of the castle and the light show that replaced the fireworks due to high winds.

We managed one more ride before hitting the shops. C3PO took us on a crazy adventure in Star Tours that all the kids enjoyed. Isaac later told me he loved the ride but thought it was funny they mixed characters who would have never met each other because they were from different movies. I hadn't even noticed, but these kids catch everything!

We were still in the shops when the park closed, and decided then it was time to go... not that there was really another option. Heading out of the park that night, I trailed just a few steps behind, taking it all in.

As I walked back towards the real world, I felt a little bit like Cinderella at midnight. I was exhausted, but it was a good exhaustion. I felt so blessed and thankful. My heart was full. I didn't have a glass slipper, but I did have some purple blinking mouse ears... and when I had passed by the final cast member at the gate, I heard him say, just to me, "Goodnight, Princess."

I teared up again right there. Thank you God, for yet another reminder. <3

He is so very good to us.

Interested in learning more about the restoration of The Walt Disney Birthplace?