As my testimony has been shared through various outlets over the last couple of years, a few characters in the story of my life have let me know how much they don't appreciate it.

Sometimes, the upset comes from feeling like they have been portrayed badly in the story. But occasionally it was because they weren't mentioned at all. Afraid of what someone might think if they step back and look at the big picture, I'm sure they imagine others thinking or saying: "Isn't that Kindall's so-and-so? Why weren't they mentioned? Where were they? Did they just let all of this happen to her and the kids?"

Let me start by answering that last part. Nobody just let anything happen to us. Our circumstances were a result of my bad choices and my pride. Other people's choices affected me, but I made the final decisions on the direction our lives went.

In response to these characters, it would be easy for me to share one of my favorite quotes and leave it at that...


“You own everything that happened to you. Tell your stories.
If people wanted you to write warmly about them, they should have behaved better.”
~Anne Lamott (Bird By Bird)

But, as I think about all of this again in the light of grace, I realize that it is important to me that people understand that I don't write to make anyone look bad. My story doesn't need a bad guy. It already has one... and he was way worse than any mere human who made hurtful choices. 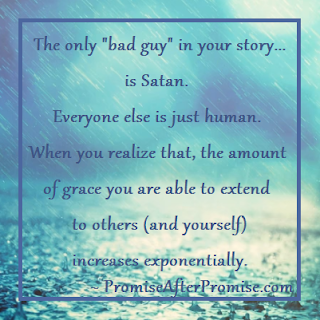 Actually, whether you write it out or not, the same is true for your story.

The only "bad guy" in your story is Satan. Everyone else is just human. When you realize that, the amount of grace you are able to extend to others (and yourself) increases exponentially.

Forgiveness is a beautiful thing. Not just the forgiveness we have through Jesus, but also the forgiveness we share with others. As I write my story, some awful things that some people did will inevitably be included... but I hope to be able to convey that I no longer associate anger or pain with those people.

I could, but I won't. I choose to have life, and to have it abundantly.

The thief comes only to steal and kill and destroy.
I came that they may have life and have it abundantly.
~John 10:10

Let all bitterness and wrath and anger and clamor and slander
be put away from you, along with all malice.
Be kind to one another, tenderhearted, forgiving one another, as God in Christ forgave you.
~Ephesians 4:31-32
Posted by Kindall Nelson at 5:44 PM No comments: